I enjoy running my own blog at codinginthetrenches.com because I am a technologist that likes to write. Unfortunately, sometimes my interests as a technologist get the better of my interests as a writer. This last week my competitive interests resulted in my blog being visually broken for several days. Furthermore, the competition has resulted in a few select articles being mis-formatted and visually broken for much longer than a week.

Today’s post is about what I’ll be doing to avoid these problems and how they can apply to your own writing platform.

My current and past employment has typically had me working in the area of web APIs and rich user applications (in the browser). I typically work on back end, non-user facing code, but I also occasionally work on some front end systems as well. This background is part of the reason why it is rather embarrassing to admit that my personal website, where I write about such topics, was very broken for a week and party broken for a couple months.

First, some background, a while back I wrote about how I was switching back from a static site generator called Acrylamid to Wordpress. Fast forward roughly two and one-half years and now my blog is being published using another static site generation tool, Hugo to be specific. I won’t go into too much detail at this point in time but suffice to say that Hugo is a “good enough” writing tool to replace Wordpress and allows me to take advantage of static site feature such as fast page load times (or so I thought, we’ll come back to this in a moment) and minimal security risks.

I’ve tried to migrate as much content between platforms as possible; at least a few posts have been through three content transformations, from Wordpress to restructured text, back to Wordpress, and now to markdown. As it turns out, I have made some mistakes in the course of changing platforms and migrating content.

This is probably the biggest web development sin that I have committed in the last couple months. In the last few years I have both broken links between my own content and broken links from the outside world.

In 2011 I intentionally, with full knowledge of what I was doing, removed the vast majority of the content from my website and rebooted my blog as a website oriented towards technical content. I wanted to hit the reset button and make my written content useful to a wide technical audience instead of being a personal log of social commentary.

Subsequent broken links were not thought out. In the first two content transitions there were articles that I didn’t bother to transfer because I didn’t feel that they were relevant anymore. I only found out later that some of those older articles were quite popular. In other cases, for articles that I did transition, I did not maintain consistent post permalinks. Perhaps unsurprisingly, from a perspective of a third party website making a permanent-link into a not-permanent-link is essentially the same thing as just not migrating the content.

Finally, in the most recent rendition of my site I went with a theme designed by a third party (ie I didn’t assemble it myself). Unfortunately, as is common in the open and sharing world of code, this third party theme had bugs. Bugs that when combined with how Hugo handles paging and content generation resulted in the back and forward pagers being broken on my website. 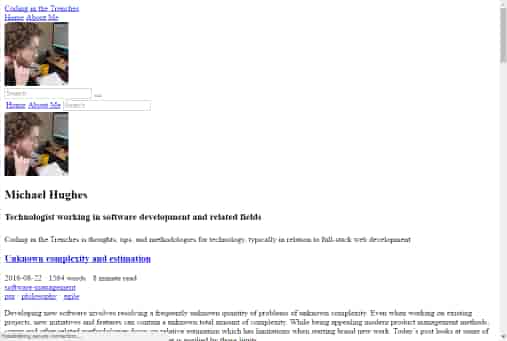 Eek! At least my content, the text, was still there but there was no styling and several images were missing. Importantly I don’t blame the theme developer for this, the blame falls to my feet because I didn’t review the result.

Specifically regarding my transition to Hugo, I used an automated tool to extract content from Wordpress and then convert it into markdown. The tool worked great for most pages. Unfortunately, the tool also broke a few pages in new and interesting ways. The export tool incorrectly handled links in article summary blocks (the blobs of text shown on the homepage article list) and in certain scenarios it rendered duplicate summary blocks into articles. As a result some of my posts had broken outbound links and had duplicated, repetitive, text.

Again, I don’t blame the tool developer. Automated tools are great because it means that all content can be migrated with the same amount of effort as a small amount of the content. In other words, automated tools help avoid the broken link issues mentioned above.

This is tough because the only way to catch the content issues here is through some clever tooling or manual review. I’m not personally aware of free, easy to use, automated tools that will catch duplicated paragraphs and images in an article. If you know of some please [drop me line]({{ < ref “about-me/index.md”> }})!

This means that we’re left with manual review of content in order to catch issues. As before with broken links, this is key to a successful migration of content from one platform to another. One thing that I can strongly recommend is creating an environment to view the website that is produced exactly like the public website, but is not publicly available. Several content related issues on this blog were not evident while locally writing content and only became visible after publication.

Hey, wait a second, my homepage takes over 2 seconds to render. I thought this was supposed to be fast.#

Web page test is a great website for testing how fast websites load and for determining how to make them faster. Here’s the recent results list for this website. The current (as of September, 2016) test results will expire after a year. For the sake of posterity it currently takes ~1.9 seconds to render anything to the page. A few days ago it took nearly ~2.5 seconds to render anything. In the grand scheme of all websites, 2.5 seconds is not bad; 2.5 seconds is not very good at all though given the context that my website is entirely static and renders nothing on the backend server (there is no backend, really, just AWS CloudFront.)

There are a plethora of ways to cache content with Wordpress and in my case I was even caching the generated pages. Essentially, my Wordpress instance was already serving a version of a static site and that any perceived slow-ness was due to how my pages were being rendered by browsers.

I am still working on improving the site in this regard. CloudFront is able to start delivering content to an end user’s browser in under one half second, I would like it if my site started rendering then too instead of waiting another 1.5 seconds.

Not reading the manual#

Effectively using cache control headers is vital to ensuring that a web site’s contents are cached correctly both by end user clients and by content delivery networks. Fortunately, the header is standardized with ample documentation indicating how it should be used to express the maximum time a cached document may be held before the client should check back with the server. Unfortunately, being standardized does not prevent developers, such as myself, from putting an invalid character in the header and then not reviewing their own work. The invalid character caused CloudFront to cache this website for an infinite amount of time, not the worst thing in world, but very annoying to discover.

I hope my misadventures with this blog and what I learned along the way help you avoid similar issues in the future.